It’s been a while since I’ve last been this excited about anything Star Trek. But, 2017 has seen me cry and laugh and root really really loudly for some of the new people we’ve recently embarked upon on a journey with, to boldly go… you know the drill.

Since I’ve been burned before, most importantly with ENT, I’d like to take a moment to appreciate everything right with Star Trek Discovery right now, in the early weeks of its first season (just in case they blow themselves to bits or viewer boredom later).

#1 There are mushrooms in space (and we can pretend Amouse Bouche never happened, finally)

I consider myself a late addition to the Bryan Fuller fandom (it’s a thing – my best friend recently held a pub quiz at a con titled simply Fullerverse quiz), since I’ve been re-introduced to the Hannibal tv show in early 2015. Still, I can without any exaggeration whatsoever say that it’s changed my life. It only makes sense, then, that bringing together two things I truly appreciate – the Star Trek legacy and one of the weirdest and most beloved showrunners in the world – would have such a bang.

And yes, since shrooms are now a positive thing, I can finally wash away the residual trauma I still sometimes feel when I go back to the early episodes of Hannibal.

Okay, okay, I do admit to the sin of being even more motivated to give the show a shot earlier because Sonequa Martin-Green is so. damn. beautiful. Just… ungh. I cannot even.

Phew, now that we’re past that, let me tell you how refreshing it is to follow a leading female, who’s not even in command, has relevant experience in what she does (and not a small amount of balls), and yet finds herself in a starting role as the new girl on a ship. (A ship she’d be more than capable of commanding herself, for that matter, but that’s a tale for another day.) It’s also nice to see someone who reminds me not a small amount of myself several years ago (minus the scientific background and her incredible wits), what with the maladjusted personal role and issues with people in a position of authority. Michael keeps surprising me, and the more she becomes interconnected with everyday lives of her comrades, the more she fascinates me.

Yeah, I know. (I do.) It doesn’t stop me from being sooo into this pure, broken boy. I honestly can’t recall the last time I’ve been so taken by a character that needs protection (and blankets) and lots, lots of love. Since I find his whole “background” quite adorable, too, I can’t help but cheer for his future, especially his love life – no matter where the journey takes them (and I’m quite aware this can only end up in tears). It’s just… there are characters that make it oh-so-obvious to me where the phrase cinammon roll came from. (Other versions apply, too.) Whatever comes out of that gate… I really hope he finds salvation in the end. (And this morning I’ve gotten such a strong urge to write a fic about the two of them, the first time I’ve wanted to do so in over a year.)

If you disagree, just check out her majesty Kathryn Janeway, and then we’ll talk. (Although, she had this strength about her that still has no match.) Lorca’s story (the tidbits we’ve been granted so far) reminds me of many a character I’ve loved over the years (the Vorkosigan brothers come to mind first), and I can’t wait to see whether he finds redemption (and freedom from his mind’s horrors) through the years I plan on watching his progress very closely. Yeah, he’s a frakkin’ douche. He’s also deeply… military. I cannot not be in awe of the ideology clashes apparent even this early aboard the En…Discovery. And second chances rate pretty high among my most precious beliefs, so… let’s see what happens.

Watching 1×07 a few days ago I’ve had serious trouble concentrating on my breakfast because I couldn’t stop laughing. Who would’ve guessed that this wierd little scientist person would become such a pleasure – not only as someone who delivers the best high-on-space-shrooms speeches, but also as a gloriously gay Starfleet officer? ❤ I’m sure he’ll stay one of my show favourites, and I’m really looking forward to seeing more small details from his everyday life with his husband, and to the expansion of the good (and infinitely patient) doctor’s role in the episodes to come.

…and the single thing I dislike at the moment – who the hell ever thought princess seams twisted into sharp angles on a female-lead crew would be a good idea? I’m loving the discreet ranking system in the uniforms (loving), but if I really end up never making a replica of it (or an uniform-inspired garment), it’ll be because of those damn angles. Not a good idea. Not there.

Now let’s see whom else I can get hooked in the show in the near future! 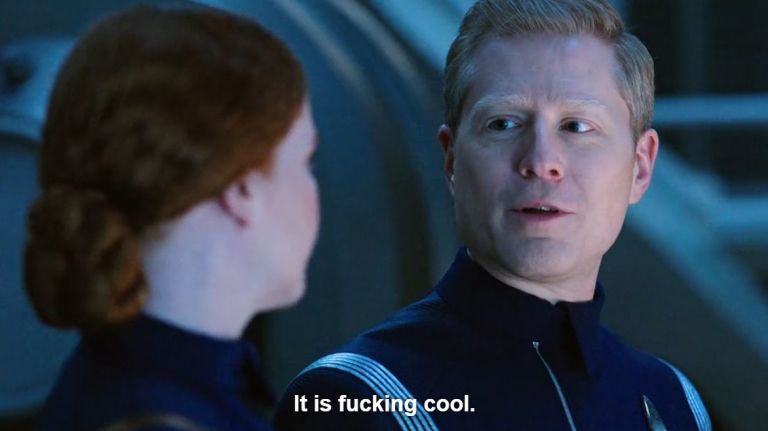 Disclaimer: No copyright infringement intended. Fun and fandom purposes only.